Smile Politely | Brew and A: a chat with Triptych Brewing 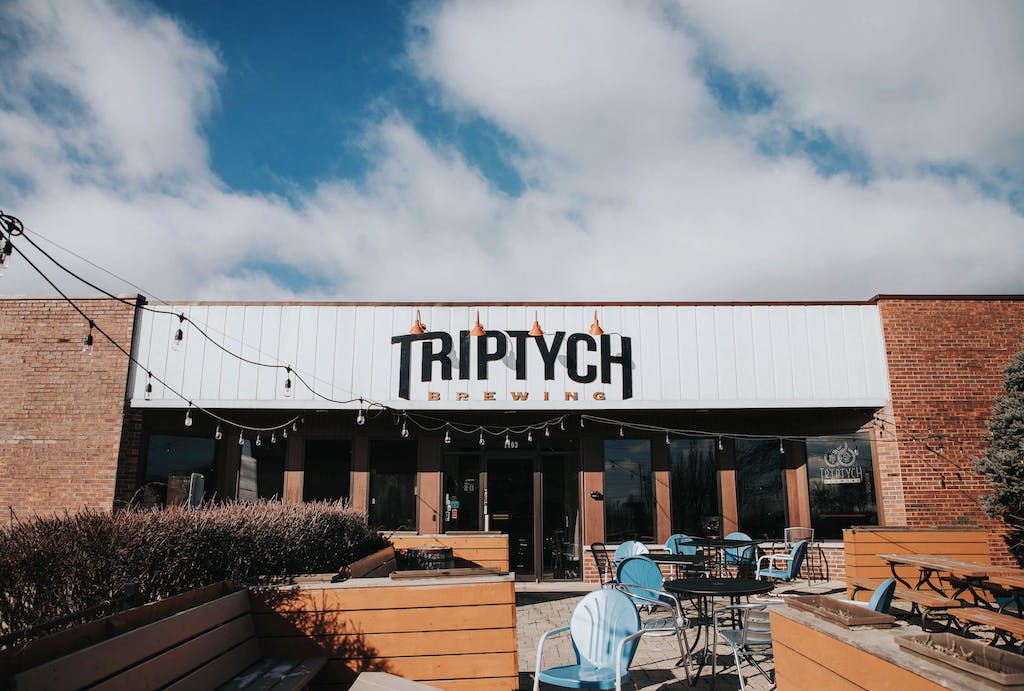 Michael Miller, Triptych’s General Manager, joined the team when it was still a young operation. With decades of experience in the food and drink industry, Miller and his crew are facing uncharted territory with the wisdom and humor that comes with working at a community-focused craft brewery.

Smile Politely: Did you have a background in craft beer before joining the Triptych team?

Michael Miller: I have worked in bars and restaurants for a significant portion of my life. I started at Mike and Molly’s. When Black Dog opened in Urbana in 2009, I started working there, and that’s where I fell in love with craft beer. I was in charge of ordering the beer, and I would get to sample the whiskeys and craft the cocktail menus.

I would order Triptych beer whenever I could. At that time, it was email based. One of the owners would send out an email, and I could pick the keg I wanted. Triptych beer would always sell really well for us. Then, I needed a part-time job, so I started working at Binny’s and did some beer ordering there. I had mainly taken that job so I could get my hands on exclusive whiskeys.

I was working at Binny’s at that time when I learned that one of Triptych’s owner had bought out two of the other owners. I emailed him and offered my sales services. I got an email back that said “Thanks, but no thanks.” I didn’t get offended by that. Triptych had only been around for 18 months at that time. About a month after my initial email, the owner emailed me saying, “You know what, let’s talk about this. I need some help.”

I started as a part-time sales representative. Instead of buying the beer, I would go out to bars and restaurants, and I’d get them new draft placement. That grew into a full-time sales job, and I started traveling around the states.

We started to grow bigger and bigger. Our sales have doubled numerous times, and we’ve physically expanded. I’ve shifted way from sales and more into running the taproom and logistics behind everything else. I’m just trying to do any job that the head brewer and owner, Anthony, is too busy to do. It’s been a fun trip.

SP: How do you come up with the names for your beer?

Miller: Sometimes the name comes first, and the beer comes later. Sometimes it’s the reverse. A lot of times it’s usually some pop culture reference or an inside joke. I think 90% of the beer names come from Anthony, but I’m able to get a few in. We have a few other inspirations around here.

A lot of movie references: like Hawaiian Shirt Day is a reference to Office Space. We have a new design that is just an internet video game reference. It’s just called “F.” Originally it was going to be a part of the Boneyard Creek Arts Festival, and it had awesome artwork on it. Because of everything that has happened, we had to throw away the label.

We each have lists of beer names we think would be awesome. A lot of mine get shot down, but sometimes they get through!

SP: Has it ever come down to two names?

Miller: Usually we know right away. Sometimes it starts out as a joke, like we have a beer called “Excuse me, sir, do you have a moment to talk about citra?” It’s a really long name. We would joke around here, “Wouldn’t it be funny if we went door-to-door asking people if they wanted to hear about citra hops?” So we ended up making that beer, and it’s been popular. We’ve made it a few times now. It was originally supposed to be a one-off joke, but we keep bringing it back.